Bellebenno release – The girls are going well and have not killed for a few days. Last week they killed a Red Hartebeest and an Eland calf. In typical cheetah behaviour, they are the most active during the cooler hours of the day and prefer to spend their midday under a shady tree. Meantime, Matti is almost finished with mapping their weekly movements around the release site so it will be exciting to see how they are progressing.

Ryan and Aymeric are still working on data entry whenever they are back in the office. They have continued with the giraffe feeding ecology project when the cats are sleeping. So far they have over 20 focal samples (which is a really good effort). 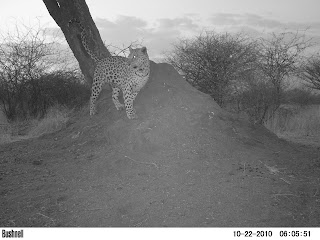 Camera traps are going well. Last week they captured some great pictures including a leopard (photo - left) that is living in the Boskop area and a coalition of two wild male cheetahs that live in Bellebenno. And this week the camera picked up some pictures of a Mother cheetah and four large cubs next to the big field (photo-below). This is the first time we have seen them in any of our traps, so it is pretty exciting. Summer is in full swing here in Namibia and the weather is hot and dry. We are looking forward to the rainy season to start as a couple of the dams are drying up. We do have the man-made troughs for the animals but naturally we'd prefer the rains to start. Cameras are being left at dry dams for a week while the animals are still visiting and then we are moving them to other locations. 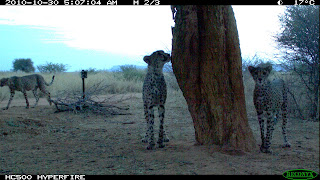 Student Intern, Sanne Kreijtz from van Hall Larenstein University in the Netherlands has been working on an ongoing project burning hair samples that have been taken from wild cheetah scat. The hair is extracted, washed and burnt into a plastic slide and then analysed under a microscope to see what the cheetahs are eating.

CCF's 2010 Biodiversity Study is coming to a close. The study has involved CCF Bush harvesting the acacia tree in areas with the aim of improving the habitat for the cheetah. The process has to be monitored closely to minimise any negative impact or loss of biodiversity in the areas. We are looking at how the local birds, reptiles and mammals, especially wild cheetahs, respond to the newly harvested area.

Finally, we have Earthwatch volunteers here for this week, so the next two weeks will be quite busy with game counts and data entry. They are always such a good bunch of people. One of them has, amazingly, been on 42 previous Earthwatch expeditions!

Kat
Posted by Cheetah News at 3:07 am