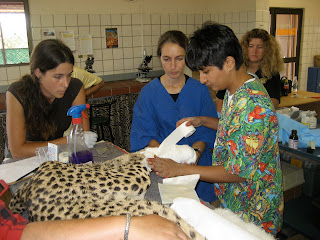 Wild Mum update: Dr. Profitt, Otjiwarongo’s local dentist, was VERY pleased with how well the wild mum’s recent tooth removal is healing.  He said in a human mouth it would take another two weeks for the progress she has made over the past 2 weeks here!  CCF staff was very excited to hear this good news, as it means she is likely to be released once a satellite collar can be placed.  We are expecting to place the collar at the end of the week, and set them free!

Joining the wild mum and her two cubs will be two females that have been with us since March, Nandi and Tina.  The two females were deemed too young back in March for release on their own, but were old enough that they would have learned proper hunting techniques from their mother.  You might remember from one of our newsletters that one of the females had to have a toe amputated after it got caught in a gin trap and we have had to wait for the wound to fully heal.  The photo shows the vet wrapping up the leg after the surgery.

During this time, CCF staff have been feeding the girls game carcasses (some caught and uneaten by our released cats in Bellebenno), and keeping their distance to help minimize habituation to humans. Now the girls have grown and the female with the amputated toe has fully recovered and is walking and running normally.

The rains have begun for the season, and all the cats are thoroughly enjoying the cooler weather. Normally a day for a cheetah involves lying in the shade and enjoying a nap but when the rains come it stimulates them to run around and play with each other.

Happy Thanksgiving to all in the US! And please don’t forget to Vote for CCF to benefit from Kruger National Park’s visitor fees.

Kate
Posted by Cheetah News at 4:42 am