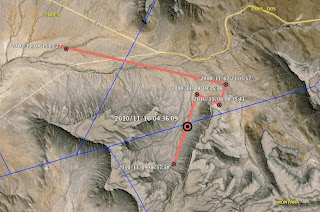 The collar seems to have improved this week, and we have seven points for the last seven days.  I should have given us fourteen, but at least it's better than last week.

For the first time in several months, I've had to add an extra farm to my movements map, this time it's Montana.  Our lady started off where we left her last week on Zaries.  By Sunday however she'd moved further east onto Zaries -Oos and stayed there through Monday.  Yesterday she ventured for the first time, south onto Montana, apparently following a dry riverbed.  As of 04:36 this morning however, she appears to be retracing her footsteps north, although she is still just on Montana.  At that time she was 2 km south of the C19 and 22 km east of the NRNR border on the same latitude as the Keerweder Pan and Jagkop waterhole.

NB: Cheetahs are naturally wanderers. In Namibia, they have the largest home ranges of any cheetah population studied to date.  CCF’s research has found that cheetah home ranges often cover over 10 farms (averaging 8,000 ha each), and even greater for females with cubs.