Cheetah Goes to the Dentist - A visitor's report.

I'm in Namibia and LOVING it! Laurie and Bruce are most gracious and I feel the heartbeat of the cheetah ... all around! 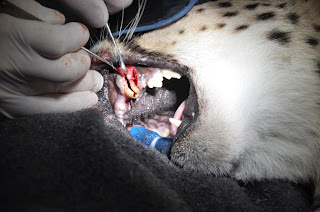 Our dentist appointment was for 4:30 p.m. An eight-year old, wild female cheetah is visiting the local family dentist in the nearby town of Otjiwarongo. She [the cheetah] and her two older male cubs (approximately 20 months) arrived at CCF about one week ago following a call from a farmer in the Okakarara area. (Read more about these cheetahs here.)

During a medical exam, it was discovered that she had a serious infection with her upper left canine and needed immediate treatment. After an x-ray it was discovered the tooth could not be saved with a root canal and was extracted. The dentist took exceptional care and local children watched in wide eyed amazement as the dentist carefully closed the area with about four sutures.
Mind you, this dentist was the dentist you and I would visit. Incredible, isn't it? Overall, the cheetah is in good health and we drove her back to CCF where she is now resting and in Laurie Marker's good hands. When she recovers she will be released with her two cubs and those children that watched will surely go home and not forget to brush their teeth!"