After looking for Kangal dogs for our breeding program for several years, this year we had an exponential increase in the number of these amazing dogs at CCF!

This summer we got a phone call from CCF USA Trustee and supporter, Polly Hix, who had found a German breeder, Kristina Peez of Sivas Guardian Angels, willing to give us another puppy. Polly brought the German female puppy (Aleya) in September to join our two breeding females (Cazgir from the SPOTS foundation in the Netherlands: 2 years, and Hediye from Turkmen Kangal Dogs in the US: 1 year).

Around the same time we were contacted by a French breeder, Anne Hupel from Bonnie Blue Flag who offered us two puppies. We picked a male (Firat) and a female (Feliz) puppy from two different litters born this summer; the male is going to allow us to use natural insemination with our Kangal females in the future, meanwhile we will use the semen that was generously donated to us last year by Tamara Taylor. As we were looking into options to get the two French puppies over to CCF, our good friend and member of the Leadership for Conservation in Africa (LCA), Patrick Couzinet (photo above), offered to get a roundtrip from France to Namibia in order to bring the puppies to us. All we needed to do was wait for the youngest French puppy to turn two months at the end of October in order to be old enough to travel. Finally, this past weekend the two puppies Firat and Feliz, arrived at CCF, escorted by Patrick who stayed with us at the center for 1 1/2 days. Firat and Feliz have settled nicely into life in the kraal (photo below), and are doing well living with the goats and sheep. Little Firat is a smart boy--he already has figured out that the best way to cool off in the heat is to lie in the water troughs, which is what the adult dogs in the kraal do. Feliz is old enough that in the next week she will start going out with the herd during the day. 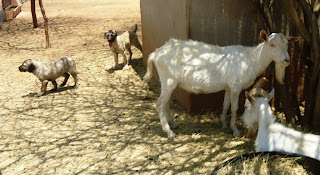 These three new Kangal puppies provide new bloodlines for our successful Livestock Guarding Dog program. As a rare breed, CCF is one of the few places in the world using these dogs for what they were breed to do for the past 5,000 years in Turkey, protect livestock from predators. The Kangal breed is an amazingly intelligent breed of dog and we are very excited with these recent puppy donations and look forward to working with even more Namibian farmers through our Livestock Guarding Dog Programme.

Cheetah purrs to all,